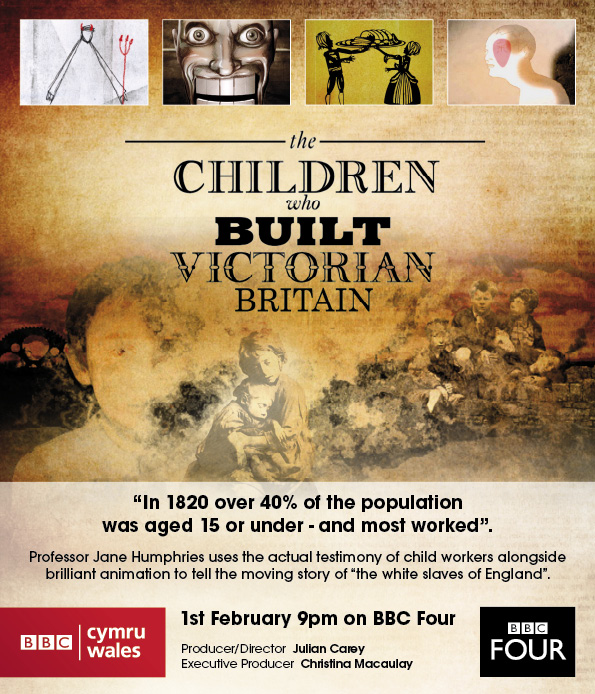 Animation students at Newport’s University are looking forward to seeing their work featured across the UK on BBC FOUR next week, after completing an exciting collaboration with BBC Cymru Wales.

Newport students worked with staff from the BBC Cymru Wales Graphic Design department to produce a fresh and creative take on the challenge of illustrating historic experiences prior to the age of photography. The animations illustrate the testimonies of child workers across Britain during the industrial age.

Caroline Parsons, Programme Leader in Animation at the International Film School Wales, part of the University of Wales, Newport said:

“This collaboration allowed our students to work with some of the most creative and professional animation teams in Britain.

“It is exceptionally challenging to document very moving testimonies from an age when technology did not allow a permanent record to be kept. By using a wide variety of animation techniques, we were able to provide a visual interpretation which I believe did more justice to the stories being told than ever could have been achieved with the use of actors.”

“We were delighted to have the chance to work with the Newport students and also some recent graduates from the animation course. Staff from BBC Wales graphics team also did some of the animations. It was exciting to be able to let all the animators, students and professionals alike, off the creative leash and see what they came up with. The finished film has a real mix of styles and is all the stronger for that. We were thrilled with the quality, imagination and creativity that shines through in these animations and are very grateful for the opportunity to work with the Newport students.”

“It is clear that the creative industries will be one of the big areas of growth for Wales in the coming years. The University is determined to help that growth and provide the skills needed. Forming relationships, like this one with BBC Cymru Wales, is very important in developing the skills we have locally and ensuring that the talent is in place to boost this area of the economy.”

“This was a bold and ambitious project. We appreciate the opportunity the BBC has given our students, some just in their first year of the BA (Hons) Animation course. The diverse range of techniques used by the BBC staff and our students, including stop motion, rotoscoping, traditional hand drawn and CGI methods have come together to create a diverse moving patchwork illustrating the live and stories of the children of the revolution. As the programme’s presenter, Professor Jane Humphries points out during the programme, there are few visual records of this time in history – animation can capture the children’s stories and bring them to life”

Further information and a selection of the animated clips can be found here.