Could you tell us a bit about yourselves?

Alex is from North Yorkshire and Luke is from Surrey. After getting over the initial Language barrier, we found we shared a similar ethos to film-making.

Both with backgrounds in Graphics Design, we chose Newport as the best place to study Animation. It was there where we met for the first time. We graduated in 2011 and have since collaborated regularly to produce a number of short films. We work predominantly with stop motion, and enjoy using simple materials and techniques to realise ambitious ideas. 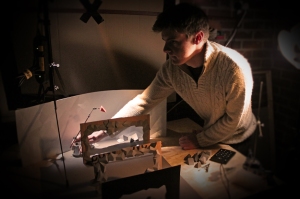 What have you been doing since leaving uni?

Since leaving Newport, our grad film, John & Betty, has been screened at numerous festivals around the world, winning awards for Best Animation and Best of Festival. We gained experience by working on various commercial and independent projects, including a Nike advert for BAFTA winner Mike Please. We entered Red Bull’s Canimation competition in Late 2011, and made it through to the final. We didn’t win, but made a lot of valuable contacts, had a great night out in Soho, and drank our body weight in free Red Bull.

What are you up to now?

Whilst working on the Nike advert, we met a producer from Agile Films who we stayed in contact with. She recently contacted us about directing a music video for up and coming artist Christa Vi; we are currently finishing and will be released in the New Year. This has led to Agile adding us to their roster of Directors, which is a very exciting opportunity.

What did Newport do for you?

At Newport, collaboration and individuality were encouraged in equal measures alongside a healthy culture of constructive criticism, forcing us to question our work which ultimately improved the quality. Rather than just the technical aspects of animation, the focus of the course was always on narrative, enabling us to develop as directors, as well as animators, helping us to find our own unique method of film-making.

Thanks both of you – good luck with it – looking forward to seeing the final film!